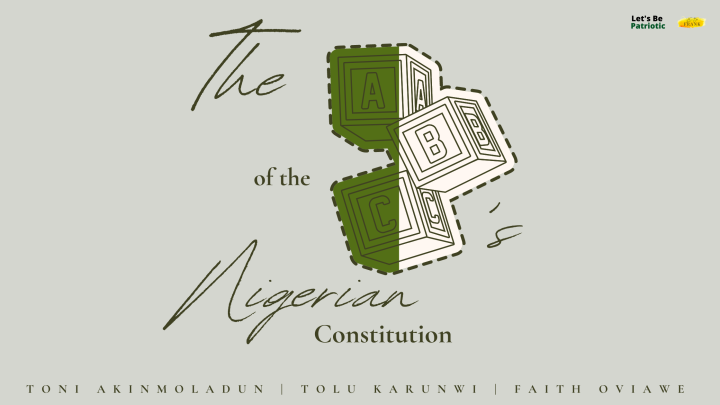 Like every great story, this one has a beginning, and here it is. The first chapter of the Nigerian constitution is about the structure and system of the country. It is what makes Nigeria a federation.

Chapter One | Part I

You need to know that the constitution is the law, and it is powerful. That means no one is above it – yes, not even the President, Governor or a Police Officer. It trumps other laws. This part is especially important because we have several rules that only apply to specific states, but they must not conflict with the constitution. If the law of a state conflict with the Federal law, it does not apply.

Note: Nigeria is officially known as the ‘Federal Republic of Nigeria.’ This information may or may not be relevant, but I leave that to you to decide.

Each State has a Governor. The headquarters for the governor is the capital of the State.

Note: There are 774 Local Government Areas (LGA) in Nigeria. That is a lot. But you should know that these are the people we need to hold accountable because change starts at the grassroots-level aka ‘LGA.’

Now we’re getting into all the boring but essential stuff, but we summarized, so you don’t have to go through the horrors of reading it. I’m joking. Or am I?

They make the law that ensures peace, order and good governance. On the Federal level, the National Assembly consists of a Senate and House of Representatives. While for the State, it is called the House of Assembly. It is important to note that laws in each State can only apply in said State. They can pass laws and stop laws from being passed. The Judiciary keeps the Legislative in check, which means they snap their fingers and create new rules. They are held accountable by the Judiciary.

Note: The legislative cannot create a law that has ‘retrospective effect’ i.e. makes criminal an act that was not criminal at the time it was done.

They carry out and enforce the law. We have the President, Vice President, Ministers, and public service officers, i.e. police officers etc. They operate on a Federal level while we have Governors, Deputy Governors, Commissioner and Public officials who operate at State level. The State does not interfere with the Federal.

Note: The president cannot declare war. Only the National Defence Council can.

Independent of the legislative and executive branches, the judiciary interprets the law and administers justice. Their power is vested in the courts. Nigeria has several courts at Federal, State and Local levels. They include:

i. the Supreme Court of Nigeria;

ii. the Court of Appeal;

iv. the High Court of the Federal Capital Territory, Abuja;

v. a High Court of a State;

vi. the Sharia Court of Appeal of the Federal Capital Territory, Abuja;

vii. a Sharia Court of Appeal of a State;

viii. the Customary Court of Appeal of the Federal Capital Territory, Abuja;

ix. a Customary Court of Appeal of a State;

And that is that about that, as far as that is concerned. Haha IFYKYK. Shout-out to Phases fan.

Here is everything you need to know about the Local Government:

Did you know you could create a new State or Local Government Area in Nigeria? The guide to doing so:

I leave you with this fun fact: the Government or State canNOT adopt any religion as a state or national religion.

That is all for Chapter I, and I hope you enjoyed reading and learning about the Nigerian government as much as I have.

2 thoughts on “The ABCs of the Nigerian Constitution: Chapter & Schedule 1”