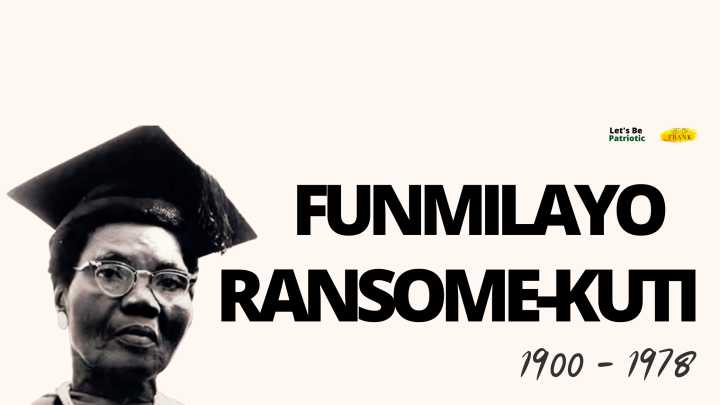 ‘As for the charges against me, I am unconcerned. I am beyond their timid lying morality and so I am beyond caring.’

We know a lot about Fela Kuti, as he is probably one of the most recognised Nigerians of all time; but we really wouldn’t be surprised about his bravery if we knew that he was born to Funmilayo and Israel Ransome-Kuti – both activists in their own right.

Mrs. Ransome-Kuti was born in Abeokuta on the 25th of October 1900 and by the time she got to secondary school, had already set a record as the first female student to attend the prestigious Abeokuta Grammar School. She furthered her education in England and returned to Nigeria where she became a teacher.

Her activism began in 1932 when she helped to establish and head the Abeokuta Ladies Club (ALC) which was initially a civic and charitable group made up of mostly Western-educated Christian women. As time went by, ALC became more politically motivated and took in a more diverse set of women until it was eventually opened up to all women in the region. It then became known as the Abeokuta Women’s Union (AWU).  Mrs. Ransome-Kuti served on AWU until her death in 1978.

She was given many titles for her bravery from the ‘Doyen of Female Rights’ to ‘the Mother of Africa’. From my research, one of the most important roles she had was as the mentor of other Nigerian women’s rights activists. A lot of women looked up to her as an exemplary role model in regards to activism.

One of her most well-known contributions occurred in the late 40s. She gained the title ‘Lioness of Lisabi’ when she led the AWU protests (of about 10,000 women) against the unfair and arbitrary taxation of women. The protest was against the Alake of Egbaland (the leader of the Egba people in Abeokuta) who had been given the right by the British to collect taxes in the region. At the time, trading was one of the primary sources of income for Western-Nigerian women. However, due to an abuse of power the market women were being forced to pay other taxes in addition to the regular income and water taxes! These exorbitant taxations were negatively affecting their businesses. Funmilayo Ransome-Kuti explored various options to try to get these taxes abolished. She unsuccessfully appealed to the British authorities to remove the Alake from power, put pressure on authorities by having AWU members refuse to pay their taxes, staged long vigils outside the Alake’s palace and so on and so forth.

Undoubtedly, they faced repercussions from the other side, who did everything they could to silence these women from not granting them meeting permits to teargassing them. Funmilayo Ransome-Kuti and the women of AWU were brave to say the least. After the Alake banned her from entering the palace, the AWU women blocked the entrance into the palace, not allowing the visiting British District Officer to leave. He eventually escaped. Mrs. Ransome-Kuti was so determined to achieve her cause that she even risked holding on to his steering wheel and did not let go ‘until he pried her hand loose’ (Johnson-Odim, 1997). After some time, the women gained support from the public as they continued to protest, and the Alake finally suspended the tax imposed on the women and appointed a special committee to look into AWU’s complaints. Finally, in early 1949 AWU’s efforts led to the Alake’s temporary abdication. No doubt, this was a huge victory because the fight against the heavy burden of the taxes imposed on the market women was won.

Mrs Ransome-Kuti continued to take on roles in political activism, fighting for women’s rights and against colonial oppression. She was outspoken about how colonialism marginalized Nigerian women and while a lot of men despised her for her boldness, she was admired by those fighting for independence and would often be the only woman invited to and involved in independence discussions both abroad and at home.

As she started to gain influence and connections across the county, the Nigerian Women’s Union (NWU) was formed.  AWU became a section of NWU and one of the objectives of NWU was to provide better support for the fight to advance women’s rights and achieve suffrage for women across the entire country.

As Fela started to gain fame, she supported his activism and would often spend time with him at his home, the ‘Kalakuta Republic’ which was a place friends and family could gather without fear of the military. Unfortunately, one of those days, on 18th February 1977, 1,000 armed soldiers stormed his property destroying property, assaulting the residents, severely injuring Fela and his brother, Bekolari. Some of the soldiers got a hold of Mrs. Ransome-Kuti, grabbed her by the hair and flung her out of a second-floor window. She was hospitalised as a result of the injuries suffered from this attack, she would later lapse into a coma.  She died on April 13th, 1978, a little over a year later as a result of the attack.

Her legacy was so admired by women around the world, with whom she had formed relationships and many of them saw her as their role model. Her funeral was attended by thousands and the market women closed their shops that day in her honour.  What a remarkably brave and driven woman.  Without her and her mentees, it is likely women’s rights would not be as advanced as they now are in Nigeria.  She paved the way and should continue to be celebrated!

One thought on “FUNMILAYO RANSOME-KUTI”

first photo dump ~ I’m a fan of this trend 🖖🏾
a happy valentines, palentines, galentines, love-day ~ all of the above to you! I’m just here to tell you that Jesus loves you & he’ll never stop loving you, okay? 🤎
‘Love was made for me & you’ ~ is what I sang to this beautiful dress that you can rent from @adayahouse because, #sustainablefashion #lewksthatslay #supportfempreneurs ✨ Honestly, getting all dolled up today was so much fun and wearing this ‘fit was a HUGE part of that so thank you @bukiiesmart for creating something so beautiful! I’m so glad I tried my luck and entered your giveaway, lmaooo 🤪
‘if I click 10 at least 2 go good’ - wise words from my current fave photographer @nikatoki
this is actually where I am mentally...✨
Loading Comments...
Comment
×
%d bloggers like this: